I do want to go through some of the actual assignments for Unit 2, but this writeup is just about noticing things and taking photos of them. It’s also about learning what the little buttons on the Flickr app do. 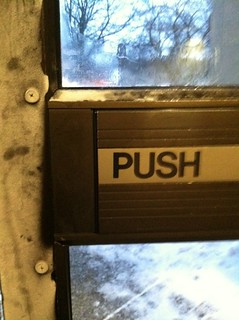 It got real cold in Ohio again. That’s frost on the inside of the Olin Library door.  (Also, we may have some humidity issues.) I was struck by the way the screws stand out in this closeup. 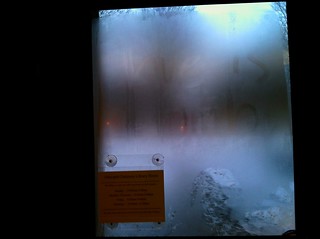 Two days later. The anterooms going into the library are frequent spots for student cell phone conversations. I suppose there’s an illusion of privacy in a room other people are supposed to walk through without stopping. Sometimes those conversations get emotional, and I imagine that’s what happened this time. You might need to look at the photo full-size, but scrawled in the frosting condensate are the words “love is dumb”.

Getting those angsty letters to stand out was a neat trick of post-production. None of the Flickr app filters helped at all, but increasing saturation, contrast, and decreasing exposure helped bring up the color in the background, reduce the light in the foreground, and help the finger-writing appear. 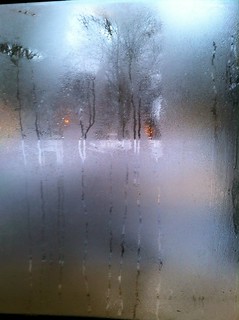 Same day, different door. Increased the saturation to get the orange lights at the Church of the Holy Spirit to pop a little. 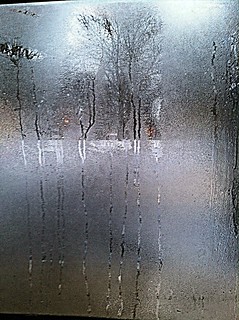 Same exact shot, in fact, but instead of messing with color, I maxed out “sharpening”. The condensate turns pebbly, almost like a rained-on window in a movie.

So I haven’t made much progress on taking better photos in the first place, but I have started to learn about the things I can do to help existing photos tell different stories. I even graduated past flipping through the presets. I’d love your comments and suggestions.