Cross-posted from my Storytelling blog, because I thought this was about making art and it turns out to be also about instructional technology. Kind of.

Man, I’ve got to figure out “write once, publish everywhere”. 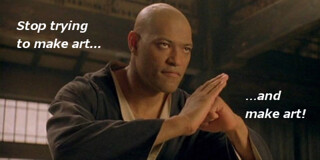 I bought myself an Intuos tablet some time ago at work, on the grounds that I would use it for Big Serious Stuff like annotating screenshots or making screencapture videos. In theory, drawing with a mouse is hard and a pen interface should be easier. In practice, a tablet input is neither like a mouse or a pen (or a touchscreen) and it can be frustrating to get started.

And there it sat, gathering dust, taunting me to read the manual, pick software, practice, prove myself worthy.

Now might be a good time to point out that I describe my drawing talents as “maxed out at stick men.” So when it said I wasn’t worthy, I assumed it was right.

I brought it home a while back, thinking big thoughts about how I’d use it to think about the shape of stories, especially as they relate to the stories we tell when we do technology trainings. Sitting on the dining room table, it caught my son’s eye.

“Oh, it’s for drawing on the computer.”

“I guess so… but I have to plug it in and find the software and all that.”

It’s hard to enter the Kingdom of Technology like a little child, after I’ve debugged and disinfected and documented professionally for so long. It’s a challenge to ask “why not?” But I got the drivers installed, and after dorking around looking for the “right” software, I figured out that Microsoft Paint would work as well as anything for letting my kid play.

And it wasn’t simple, his learning to match up the pen to the screen. After a bit, he got it and started exploring Paint. An arrow became a house. Green squiggles became grass. A line was the horizon; the fill tool gave him purple grass and a yellow sky.

And he said it was my turn.

How about a bunny? I think I can draw a bunny. (It’s like a dog with no neck and bunny ears, right?) Hey, maybe the spraypaint brush will make the fur look more furry. A bunny should be on grass. OK, painting that grass was kind of annoying, what if we do the sky with a fill tool?

Draw your stuffed hamster? Sure, why not. I can draw Hamster.

Oh, the hamster’s name is Rhino? Of course it is. I’ll draw Rhino.

Objectively, I know it’s … primitive. But the fact is, I made it, and making it was fun. And I pretty much killed the excuse that learning how to use the tablet would be too hard.

I’ve tried to get multiple faculty members to try out these tablets, and few of them are willing to put in the work. I wonder if the problem is that I haven’t asked them to just draw a happy little tree.